Tip is a Shetland Sheep Dog “Sheltie” who has become a regular member of the CPC Choir. His owner, Brian Hughes, discusses how Tip became an integral part of CPC and its Choir:

Tip was born 28 April 2011. His first year was with his first owner that could not afford him when he lost his job; Tip then went to his owners relative on a farm that had animals of all types. Sheltie Rescue Of Central Indiana (SRCI) convinced them to release him to rescue because they were afraid he would get hurt, he is a very small dog (16 lbs and 14 inch tall). Tip was my first Foster with SRCI; he was 2 years old,  and needless to say I still have him. 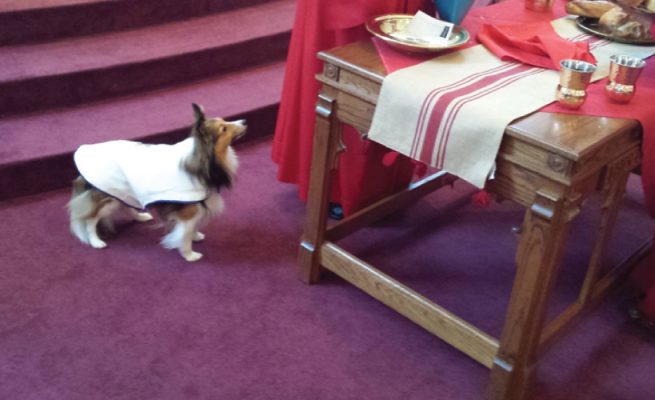 Tip started coming to CPC during the weekly meetings of the Pastoral Nominating Committee (PNC). Tip suffered an acute pancreatitis attack the week before Easter of 2016. I could not leave him unattended at home during the meetings so he became the extra moderator. If a discussion became too heated he would sit up and voice his opinion until things calmed down. After that a committee member asked if he could return for all the meetings which he did. He attends choir practice on Wednesday nights and sits in the choir on Sunday morning. When the choir got new robes last year, some of the members made him his own “robe”. Tip goes with me to the bank  every week to deposit  money, where he always receives a treat. He attends all meetings that I attend.

Tip has not been trained other than the regular weekly routine. He is very special in his ability to understand what is expected of him. Most Shelties have this ability but only a few display it to the extent that Tip does.

We rarely hear from Tip unless there is something out of the ordinary, like when the pastor wore a strange looking “jester hat”  on his  head the Sunday before the Cajun dinner.